Granting of Royal title to Curragh Golf Club in 1910 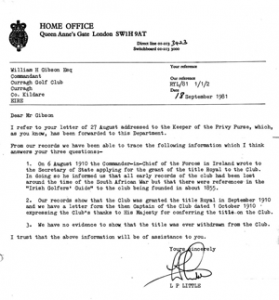 On 21st September 1910 the new King George V approved of the Curragh Golf Club “being allowed to use the prefix of Royal “ just six weeks after the Home Office had received a request for this privilege from General Sir Neville Lyttelton, Commanding-in-Chief the Forces in Ireland. In his letter, Lyttelton gave some background on the Curragh Golf Club saying  “It has been impossible to ascertain definitely by whom, or how, the Club was formed, the old Minute Books having unfortunately been lost at the time of the South African War but ‘The Irish Golfers Guide’ states the Club was formed about 1855”

Subsequently, the major Irish newspapers carried notice of this new Royal golf club – The Irish Times and Irish Independent carried brief announcements on 29th September and on 1st October the golf writer of the Irish Times wrote “It is in many ways a happy selection, as no Irish golfers will envy the soldier’s club its new honour…………. There are Irish Clubs more important, but not older, than the Curragh: but a choice among them for the honour would probably have raised a storm of criticism.” Twelve years after the granting of the Royal title, the British Army handed over the Curragh Camp to the new Irish National Army on 16th May 1922 and any references to a Royal title were, understandably, set aside by the new influx of military golfers. No records of the Club were handed over by the outgoing golfers and the newcomers found that they had sold the former Clubhouse of the Royal Curragh Golf Club to the Dominican College in the nearby town of Newbridge.
I began researching the history of the Curragh Golf Club in 1981 when I was informed by the Captain, the late Colonel Mick O’Shea, that he had been at the Centenary celebrations of Royal Belfast Golf Club and someone there had told him that our Club had a Royal Title. He asked me to see what I could find and this search would lead to publication of the history of pre 1922 golf in Ireland in my “Early Irish Golf” in October 1988. In that pre-internet era, my first attempt at finding the evidence for a Royal title was a letter dated 27th August 1981 to the Office of the Privy Purse in London; someone had told me that this was a likely source of information. Not long afterwards I received a concise, comprehensive letter dated 18th September from Mr. L.P. Little of the Home Office, wherein he confirmed that the Royal title had been granted in September 1910. In answer to a question, Mr. Little confirmed that the Royal Curragh Golf Club title had not been withdrawn. 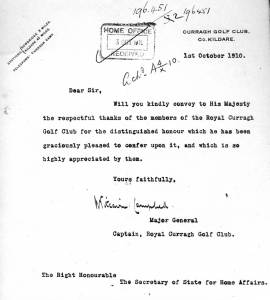 The history of Ireland since 1922, following the withdrawal of the British administration from the 26 counties, has been marked by conflict. Initially, the Civil war of 1922/1923 left many scars within the community and many families have bitter memories of loved one lost in the internecine feud. Subsequently, the IRA campaigns in Northern Ireland have added many bitter memories and have fuelled anti-British sentiments over the years and the question of a Royal title was ‘parked’ until an appropriate moment in time. The state visit of Queen Elizabeth II to Ireland in May 2011 was widely seen as a great success and it marked a new, mature relationship between Britain and Ireland. With so many sporting, cultural and family ties to the neighbouring island a significant majority of Irish people welcomed this new relationship.

Thus, following the declaration of the Curragh Golf Club as the oldest Club in Ireland in July 2013, 2 the Club Captain (Lt. Col. Declan Rasmussen) felt that the time was right for discussion among the members regarding re-instatement of the Royal title. Over the following months, leading up to the Annual General meeting in December, various Club newsletters carried information on the topic and two weeks before the A.G.M. on 2nd December I presented the evidence to Club members in a PowerPoint presentation. The motion to change the name was proposed by Lt. Col. Rasmussen and seconded by myself at the Annual General meeting. There was a lively series of submissions, with several members urging no change and others noting the change in attitudes in Ireland and that the time had come to make the historic change. The outcome was a significant majority of members voting for re-instatement of the name “Royal Curragh Golf Club.”