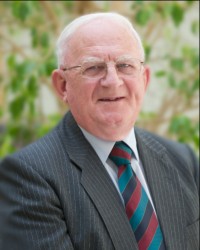 Having served his country with distinction during a 42-year career with the Irish Defence Forces, retired colonel William H Gibson has continued his invaluable service to Irish golf.

Since retiring from the military in 2003, Gibson has maintained his passion for golf’s rich history. A prolific writer, Gibson is currently completing work on a book entitled: Early Military Golfers 1744 – 1815. He has also contributed to a work on the history of golf in India, his expertise much in demand beyond his native shores.

A globetrotter during his military career, which saw him serve in Angola, Cyprus and at the UN Headquarters in New York, he was Commandant of the Military College at the Curragh upon his retirement in 2003. The Curragh was also where he indulged his passion for golf, becoming a member in 1968 and serving as captain in 1985.

While researching the history of the Curragh golf club, which was renamed Royal Curragh in 2013, he found evidence of the club’s foundation in 1858. Gibson continued his research into the history of Irish golf and eventually published his first book in 1988. Early Irish Golf – the history of golf in Ireland from 1608 to 1922 – was the first book of its kind to be published in Ireland.

Clubs across the country have tapped into Gibson’s expertise ever since, including some of Ireland’s most famous golfing destinations like Royal Dublin, Royal Co Down and Portmarnock. His work with the Golfing Union of Ireland saw him assist William Mention during his work on the history of the GUI in 1991 as well as writing material for the GUI’s golf museum at their headquarters in Carton Demesne. Gibson was made an Honorary Life Member of Royal Musselburgh (Edinburgh) in 1985 and was accorded the same honour by his home club in 2009. He is also an Honorary Life Member of Newlands.

In 2011, Gibson was honoured by the Irish Golf Writers, who presented him with a Distinguished Services to Golf award. While his writing details the past, it will forever be appreciated by future generations.